While a sump pump is essential to avoid a flooded basement during torrential rains or storm season, it’s not the only solution that’s beneficial to homeowners. The reality with a traditional sump pump is whilst it should start up when the basement floods, it often fails to do so. This may be because the float trigger mechanism got caught up, but most often it’s simply because of a power failure. During a storm, it’s very common to experience a local-based power cut. Should this occur right when the flooding begins to overwhelm the area and water is reaching down into the basement, this spells disaster.

The way to avoid this issue is to also own a battery backup sump pump. This is a sump pump that can be used in conjunction with its own battery (usually both sold and purchased separately to the backup sump pump). With a properly charged battery, the sump pump kicks on when the float switch is triggered regardless of whether the power supply is still on or not. In this situation and when wanting to go check on the basement with heavy rain coming down, it’s probably a good idea to have emergency floodlights fitted inside the basement too – or, at least, own a powerful LED flashlight. Okay, so let’s now look at what the battery backup sump pumps are in sump pump guides.

The Wayne ESP25 is a capable model. It provides the necessary backup facility for an existing sump pump through its own system. This should cover a post-flooding situation for a small-sized basement where the power has failed. The product comes with a battery case, a sump pump with a plastic casing, and a float switch. The battery case is intended to fit either a 40-amp hour or a 75-amp hour battery from Wayne which will sit perfectly inside and provide enough power to keep operating. The battery itself isn’t included with this model. It has to be ordered separately to make a complete set. However, because there’s a choice of two battery capacities, this isn’t so bad. The batteries themselves do not require any maintenance to keep them running well.

The sump pump can pump out 3,300 gallons of water every hour. This might sound like a lot but when floodwater starts moving in, it adds up fast when there’s nothing to prevent its arrival. When needing to pump the water uphill, then the gallons per hour capacity will decline. The LED indicators on the top of the case and the loud alarm that alert you when you’re not in the basement, are both welcomed here. A 2-year limited warranty is included with this backup sump pump.

The new and improved ESP25 is a significant improvement over the previous model. The sump pump itself is branded more clearly as a Wayne pump. It doesn’t use plastic casing materials any longer which tend to break down much faster in a sump pit. Instead, these have been upgraded to use cast-iron for the base and the body is made from steel with epoxy for waterproofing too. This combination will add likely several years to the usability of this backup pump system because the biggest failure with sump pumps is often from holes in the casing through water degradation. The gallons per hour rating for this pump is 2,900 GPH. This is slightly below the 3,300 GPH previously, but the difference really is immaterial and won’t be noticed.

The top of the battery casing has LED indicators and there are alarm sounds for times when the system is being initiated or the battery is running too low. The charging is similar to a trickle charge effect to avoid the battery getting run down right when it’s needed. There’s no battery supplied here. A 40-amp or 75-amp hour 12-volt battery is required.

The SJ10 sump pump from Liberty is a little bit different from other backup sump pump options on the market. As a Sump Jet, it’s designed to connect to the local county’s or city’s water supply. This supplies the necessary PSI pressure (20 up to 100 PSI) that is used to create the pumping ability. As such, there’s no direct electricity required, so this model doesn’t need a separate battery (or to replace one periodically either). The rating on the SJ10 is that it will pump out 2 gallons of water for every 1 gallon that’s sourced in from the local water supply. Therefore, it becomes more expensive to operate depending on how much water is needed to be pumped out. However, when there’s no pumping required (which is usually most of the time), there are no ongoing operating costs at all.

It’s advisable to add backflow protection to avoid getting pipes clogged up with collected debris. This doesn’t come with the product as it’s more of a plumbing function. With that said, the product comes fully assembled ready to use. This product has a two-year limited warranty.

The Wayne WSS30VN is a beast. It’s designed as a combination tool that includes both a primary ½ horsepower sump pump and a backup system that runs on a battery. Purchasing this product will save on needing to buy a sump pump and a backup sump pump separately and getting them installed one-by-one too. The primary sump pump is more powerful with up to 5,100 gallons per hour at its disposal. This is when pumping water on a flat surface. However, when pumping water up an incline, the GPH will be reduced (2,400 gallons at a 15-foot incline). The pump is produced with a steel casing finished with epoxy protection and it has a cast-iron base too. This is superior to a plastic product finish.

There’s also the backup sump pump which runs on 12-volt DC power from a battery. Up to 10,000 gallons can be pumped out from one charge up. A Marine-style battery is required to be purchased separately. A three-year warranty is included too.

The Zoeller 507-0005 is the perfect complement to other products in the Zoeller range like the M57 sump pump. The idea of this product is that provide a battery backup facility from any sump pump that you already own (or purchase separately). It does not come with its own sump pump but instead is capable of supplying power via a connected battery (the battery is also not included). The battery charger offers a safe, secure placement for a battery inside a polyethylene case. The recharged flow of 10-amps to the battery ensures it stays charged overtime to not let you down right when you need it.

Built into the unit is a system of warnings alarms to alert you about when it has started up or if there is an issue with the connected battery. Audible warnings, lights flashing, and more ensure you won’t miss a notification. These are solid-state parts, so they’re not moving parts that are likely to corrode.

In this guide, we break down a few of the important factors with a backup sump pump.

Depending on the type of backup sump pump equipment, usually, you’ll want to closely match the size of the existing equipment with the backup equipment. Not every backup sump pump will be applicable to work with other brands. Therefore, if you own a certain Zoeller sump pump, then looking for a compatible Zoeller battery backup sump pump is going to be best. Backup units must be set up a certain way and be positioned correctly. There needs to be enough space for both the original sump pump and new backup unit to be installed (unless it’s a combination sump pump with a backup system too).

The subject of how to power the pumping ability is often debated by owners of basements. There are several ways to go about it:

With the first option, it works fine but it’s wholly dependent on maintaining power to run the pump. Otherwise, the basement could flood, and the sump fails when it cannot operate due to a simultaneous power failure. With the second option, a sump pump (and possibly a second one) are run by electrical power and also battery power. While the battery cannot operate forever without being recharged, it provides a more robust system to protect the basement should the power go out because of extensive flooding hitting power lines. The third option relies not on electrical power at all, but instead on the water supply. As long as the water isn’t shut up due to an emergency situation, this backup pump solution will run. However, if there are flooding and the water supply is halted, it won’t function. 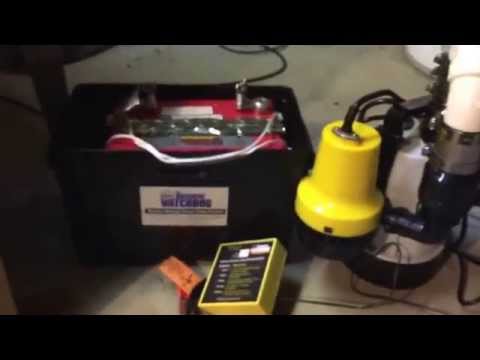 With moving water, most basements are below the ground level. As such, should they flood, water evacuation is needed to flow upwards, against gravity? Therefore, either the pumping pressure has to move higher to get the same volume of water to flow upwards or the pressure remains the same, but it subsequently reduces the gallons that can be evacuated each hour. In the case of backup sump pumps, it’s usually the latter that’s the case. The deeper the basement, the higher up water will need to be projected. So, pay attention to that as the gallons drop significantly even if need to pump water up 10 feet from the basement level to the ground level above it. As such, a more powerful motor on the sump pump and a strong gallons per hour rating is required to get what you need in a crisis.

Whilst you often see the backup sump pump recommended, the truth is that if you already own a sump pump by one manufacturer, you’re best picking their backup solution to avoid compatibility issues. Failing that, it’s on you to ensure that a differently branded backup sump pump will work happily with a different submersible sump pump that’s already owned. Beyond that, pay attention to the gallons per hour to see how the unit will run when moving water across the basement. Expect a dip on that when moving water upwards.

Also, consider the power capacity of the battery because there’s sometimes a choice of 40-amp hours vs 75-amp hours; the latter is a better choice. The last thing you need is a pump failing because the battery is drained. Choose your backup solutions wisely from the above list of best battery backup sump pump guide.